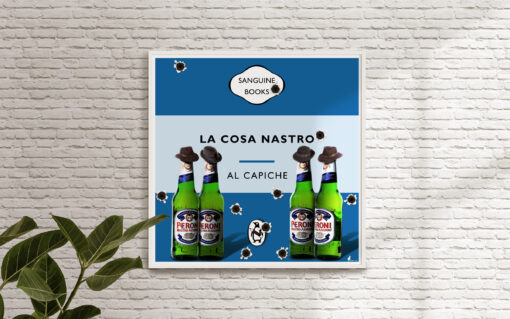 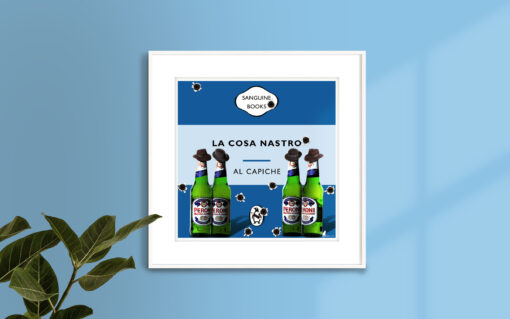 I definitely wouldn’t want  to meet these four down a dark alley, and certainly not if they were empty!  This is probably – although you can never say never! – the last addition to the Sanguine Books’ collection. The idea for this cover came as I was watching an episode of  Boardwalk Empire, the excellent HBO prohibition-era series about gangsters set on the east coast of America. Rather than fast forward the adverts as normal, I was looking at the bottle of beer I had been drinking – a Peroni Nastro Azzurro – and the idea came to me that the bottles themselves could perhaps be members of an organised crime syndicate like the Mafia, or as they are otherwise known, The Cosa Nostra. After sourcing the right type of fedoras to use and applying some effects to make the bottles and hats look a little more like a painting, some cast shadows were included to add some menace. Originally the cover was (blood) red – to reflect the subject matter – but was changed in keeping with the beer’s product description and colour scheme. The author’s surname references an italian word that has become Americanised and popularly used in gangster movies.
DISCLAIMER: This picture does not in any way suggest there is a link between the makers of the beer featured and organised crime!